When You Use Public Speaking to Move People to Action.

Advantages of training with Achieve That Next Level include:

Theresa Sperling, CEO and Lead Trainer for Achieve That Next Level, landed her first job in the training industry in 1993. Here, she spent several years coordinating health and safety training events nationwide for approximately 2000 employees. Next, Theresa spent many years in the housing industry and connected to real estate activities. Her experience ranges from sales and leasing to portfolio management. In the mid 2000’s, Theresa transitioned to residential lending. As a licensed loan originator, Theresa spent as much time training and mentoring new originators as she did writing loans for her own clients! She became well versed in the lending laws and compliance issues. Because of her skill to explain complex concepts, this led to helping potential licensees prepare for the required state administered examination. In this role, she mentored many individuals new to the field and demonstrated how to conduct their business ethically.

After a several years writing loans, Theresa found her dream job and joined the lending division of a regional bank as a Training Specialist. With this employer, she gained in depth experience in classroom training and course development. Her specialty became compliance, fraud prevention, and “Lending 101”.

After many years of naturally being the one to train new employees and also a member of Toastmasters International, Theresa discovered her passion was both public speaking and training. In 2014, Theresa met Sue Gaulke, who developed The Speakers Training Camp. This proven program represented the perfect combination of Theresa’s passions. She traveled to Atlanta and became certified to teach Sue’s course in both the United States and Canada. As the certification training wrapped up, Sue Gaulke described Theresa as a “Star”.

Now Theresa enjoys presenting various talks on leadership concepts to different groups, as well as conducting and developing interactive workshops. She describes it as a genuine “thrill” to see the transformation in her students. According to Theresa, “Earning that certification and constantly developing myself, allows me to do what I have truly been called to do and what I love to do.”

We are certified to teach the internationally known, Speakers Training Camp. This program has been presented to Fortune 500 companies, mid and small sized companies, as well as individuals looking to improve their presentation skills for over 30 years.

Our presentation of the program helps you gain confidence, control nervousness, and connect with your audience. Beginners to experienced presenters are encouraged to attend. 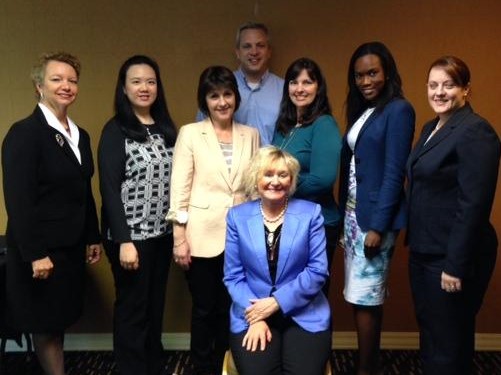 This is our class photo with our mentor Sue Gaulke.